God works in mysterious ways…though sometimes they’re not so much mysterious as they are frustrating.

I’ve spent the last three weeks barrelling through every episode of BBC’s Call The Midwife. 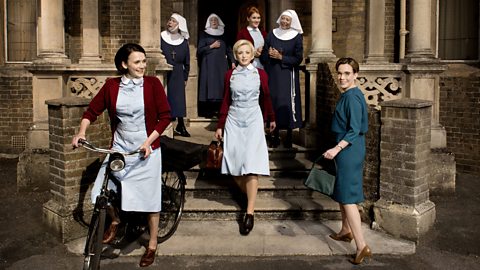 If you haven’t heard of this series, then I have told you the good news; go now and watch it. If you have heard of it, but don’t watch it, why? It’s many different kinds of awesome.

Today I’d like to discuss the sixth episode of season five. In this episode, there is a series of attacks on isolated women at night. A man stalks these women, beats them, bites them, and (though it’s not made clear) sexually assaults them. The first woman to come to light is out soliciting. She has/had a husband who has abandoned her and her children, so this is the means she has found to put food on the table. She’s managed to flee her attacker when she bumps into a nurse (Barbara) and a vicar  (Tom) on their way home for a date. However, she refuses to go to the police for fear that she’d be charged with a crime herself. And she isn’t wrong: in England in 1961, prostitution is a crime (but only for the prostitutes, not their customers).

The second victim (that we know of) is a young mother who is out strolling with her baby in the evening, hoping that he will stop crying. When he doesn’t stop, she tries to abandon him in his pram, and it is just afterwards that the assailant appears. Out of shame and fear that social services would take her baby away, she also refuses to report the incident to the police.

Eventually, the police hear of the attacks from the nurses who helped each woman, but as no formal complaint is made (and the nurses don’t officially give away the victims’ identities), they can’t get the details they need to investigate the case. It is a frustrating situation, yet an understandable one; the women would rather not be attacked a second time in the form of societal judgement on their characters and actions. And rightly so; already a Civil Defence Committee volunteer, when informed that his nightly patrols would be intensified, hints that these “ladies” might not be worth protecting.

The assailant, probably confident that he’ll not be caught, is on a spree. He attacks another woman.  This time, his victim is Sister Mary Cynthia, a midwife and nun who is on her way home from saving a young woman’s life (and womb). She stops to pray on a bridge when she is attacked from behind. Whatever the assailant does to her, it happens off-screen, but we see her unconscious on the bridge at daybreak. She wakes up, bruised and disoriented and manages to make her way back home, where her fellow nurses and nuns have been waiting anxiously.

Understandably, Sr Mary Cynthia is overwhelmed by a torrent of emotions: she is angry at God, confused about why this happened to her, disappointed that God and her nun’s wimple and habit did not protect her, repulsed by the idea of anyone touching her, wants to be isolated, and refuses to speak to the police. She does say that she wasn’t raped, just to put everyone’s mind at ease, before she puts an emotional wall around herself. Despite this, Sr Mary Cynthia doesn’t have to carry her pain alone – all the nurses and midwives silently bear her up with their love, although they are cautious about reaching out to her. Eventually, Sr Mary Cynthia’s wall is breached by Sr Monica Joan, who helps to clean her wounds. Afterwards, she decides she will speak to the police. Her reason: the other victims were too scared to report their assaults because of what people would think of them. She has no such constraints, and so she will help the police catch this man before he attacks someone else. And she does.

Sr Mary Cynthia, and I suppose the rest of us watching, may have received one answer to her question: why did this happen to me? As a nun, she far surpassed society’s expectations of womanly virtue. She also had a profession that was well-respected. On the scale of (socially-approved) morality she was probably somewhere at the top, which made her attack all the more horrific. You see, certain people would have been perfectly happy to let these attacks carry on as long as the victims were merely women of ill-repute whose assaults were probably some karmic punishment for their questionable lifestyles and choices. But if a nun gets attacked, that’s a different matter – the man responsible must pay for his crime. Sr. Mary Cynthia was in a position to be a voice for those who didn’t dare speak out. And her voice ended a spree of violence.

When God let the good sister get attacked, He had a plan… yet… was this the only way? I mean, why didn’t the assailant fall ill so he couldn’t attack anyone? Or couldn’t he only have come out on nights when there were no isolated women?   I often feel that my prayers are similar questions. God, I know that because of my childhood, I’m better attuned to children in desperate need of love and acceptance. But did I really have to go through so many years of isolation? God, I know what it is to be abused, and I know that it is possible to heal from the trauma that follows, and I can show other victims the way forward… but why does any of us have to be abused in the first place? You can stop it happening, or can’t You?  I often understand that God’s plan shines forth in the midst of the darkness, the suffering, the pain, the misery. However, I can’t help but wonder why there has to be any darkness, or suffering or pain or misery.

I don’t have all the answers. Maybe one day I will. Maybe I won’t. But I trust that Someone Else much greater than I am does have these answers, and this trust will suffice.